Discover The World Slowly – One Country at a Time

Are you planning to visit Prague and thinking to try some traditional Prague food? Have you been already to the capital of the Czech Republic but were not sure what to choose at the restaurant? I would love to introduce you to local cuisine and show you exactly what to eat in Prague.

Once you know the names of Czech dishes, it will become easier to read the menu and place an order. And of course, get a taste of authentic Czech food.

I remember when Mark and I went to Prague for the first time we were absolutely confused during every single trip to a restaurant. Knowing a few Slavic languages didn’t really help in deciding which meal to order. It took us a while to familiarize ourselves with traditional foods and come up with this list.

So here it is, an introduction and description of traditional Czech food to eat in Prague. Either it’s your first or twenty-first visit.

If you would also like to visit one of the bars or restaurants that offer an amazing view of the city, take a look at this guide. 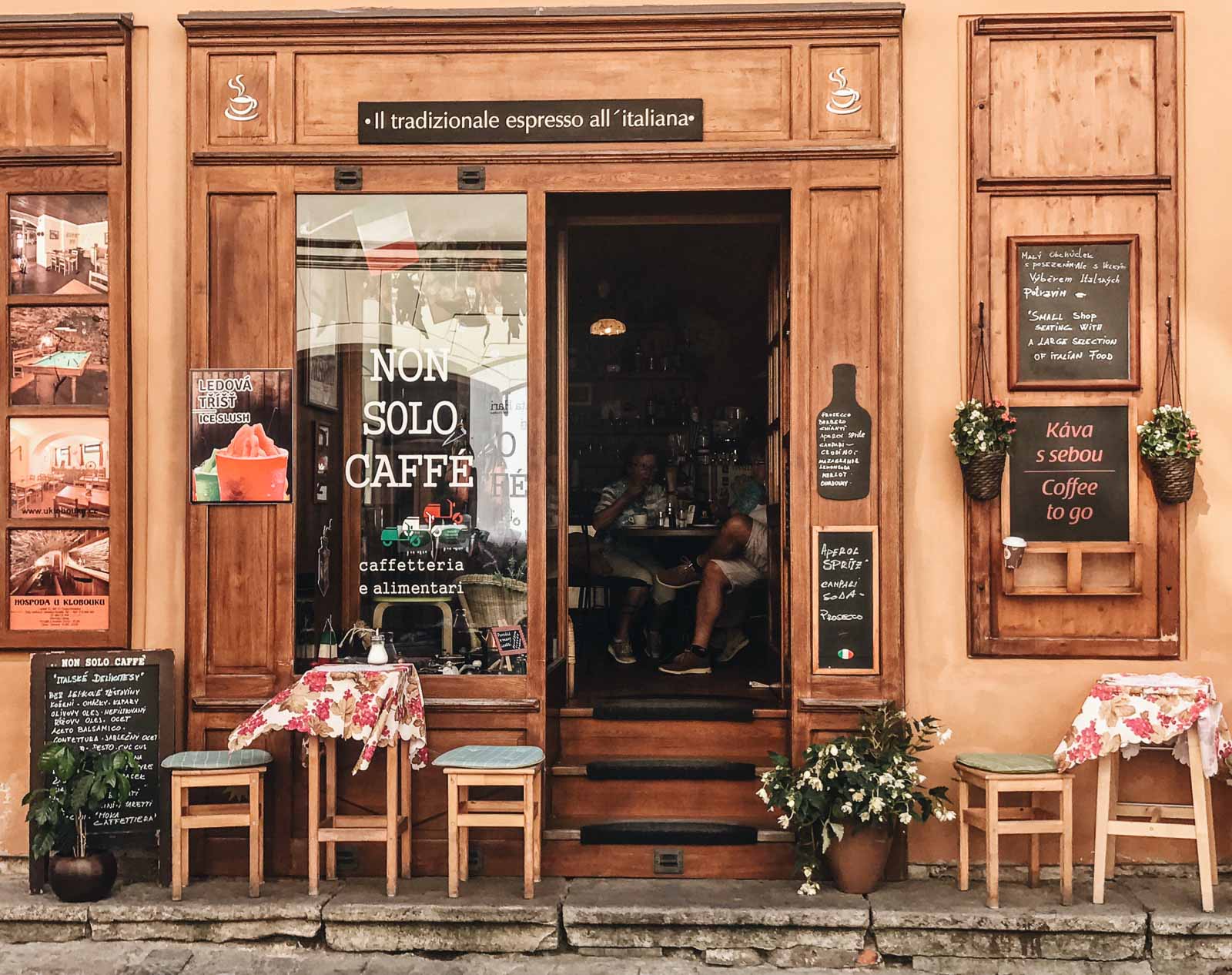 Beer is the number one national drink in the Czech Republic. In Prague, as anywhere else in the country, beer drinking is more like a ritual. Locals love having it over chitchats with friends or colleagues while munching on some snacks. If you would like to try drinking beer as locals do, here is the list of must-try beer snacks:

Hovězí tatarák s topinkami – this one is not for the faint-hearted and I bet you haven’t tried this before.

So basically, this is raw minced meat with toast and some spices. Anyone? Yes, Czech people eat raw meat with their beer. And no, that’s not common for Eastern Europe. 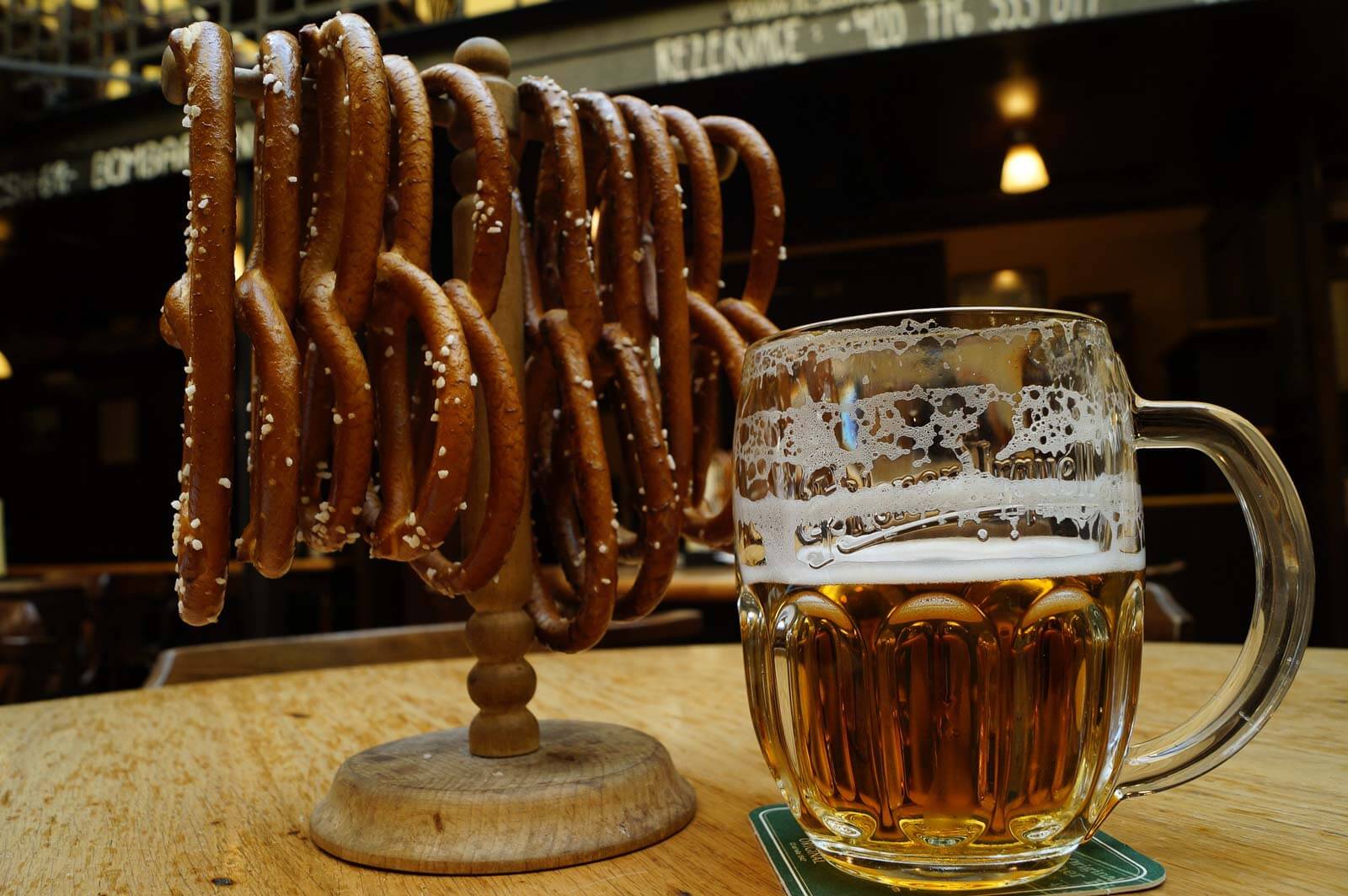 RELATED POST: FUN THINGS TO DO IN PRAGUE – TIPS FOR ANY TIME OF THE YEAR

Czech people love eating soups (called polevky,) that’s why each restaurant and cafe in Prague will have plenty of soup choices on the menu. Here are some of the most popular for you to try:

Česnečka – is a garlic soup with potatoes, spices, garlic, broth, and smoked meat.

Cibulačka – is more like a french onion soup, made with onion broth, croutons, and grated cheese.

Bramboračka – potato soup with smoked meat or mushrooms which is usually served in a bread bowl.

Gulášová polévka – it’s like a Hungarian goulash but more liquid, made of beef, vegetables, and paprika.

Pivní polévka – beer soup. You may be thinking: “what?”

You’ve definitely heard how much Czech people love to drink beer. Probably as much as Americans love drinking soda. They drink it, eat it, bathe in it. They have it for breakfast, lunch, dinner, between meals, and as a late-night snack.

When you are visiting Prague, you gotta try that beer too. If drinking this beverage is not your thing, at least try it in your soup (grinning.) And then go on a Prague beer tour.

This soup is made of potatoes, beer, cream, cheese and served with toast.

Jihočeská kulajda – mushroom, potato, parsley, and sour cream soup which is usually served in a bread bowl too. It’s a bit similar to a traditional mushroom soup of Ukraine, if you tried it then you’ll know what to expect. 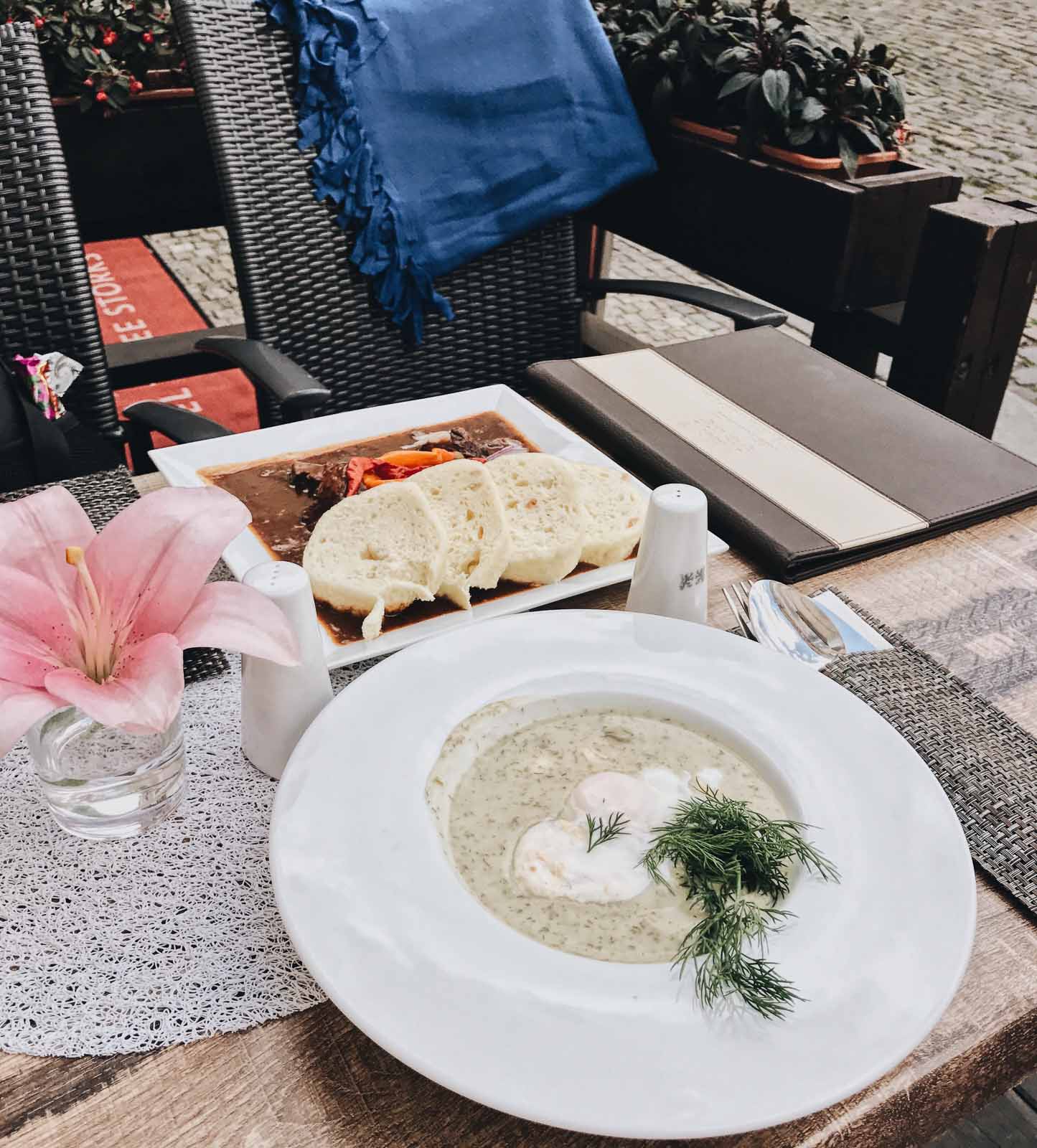 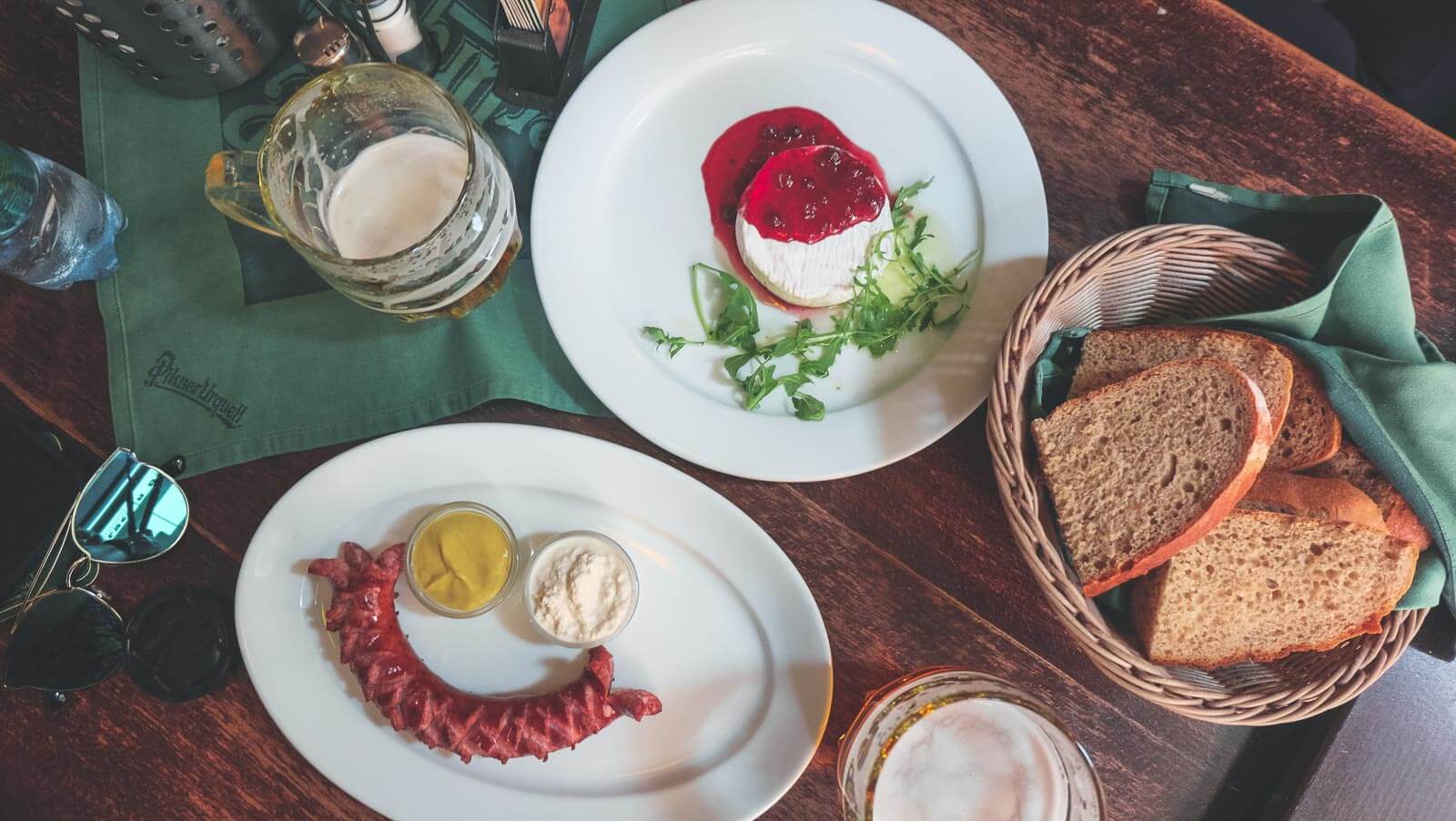 Vepřo-knedlo-zelo – a classic Czech dish which is a roasted pork loin with onion and gravy over stewed cabbage and boiled bread dumplings (in Czech knedliky.) It is a must-try food in Prague for every visitor.

Pečené vepřové koleno – baked pork knuckle that comes with horseradish, mustard and fresh or pickled vegetables on the side. When ordering, double-check on the weight because sometimes it can be too big even for two.

Smažený Vepřový Řízek – breaded pork cutlet. Usually comes with a side of mashed, fried potatoes, or french fries. It reminds a schnitzel but always made of pork meat.

Svíčková na smetaně or just svíčková – it is one of the most popular dishes in the Czech Republic when veal or beef tenderloin is cooked with vegetables, sour cream sauce, bay leaf, thyme, and spices. Comes with bread dumplings on the side.

Pečená kachna – baked duck which is usually served with boiled bread dumplings, stewed beets, or cabbage (or all of it together.)

Tradiční smažený kapr – breaded crispy-fried carp fish. Czech don’t eat fish often and you won’t find this dish in every restaurant. Usually, they cook it for Christmas. So, if you see carp on the menu, make sure to give it a try since it’s one of the rare traditional Prague foods around and one of the simple but unique foods around the world.

Pečený pstruh – a trout, baked with spices and lemon.

RELATED POST: YOUR ULTIMATE GUIDE TO THE MOST MYSTERIOUS CASTLE HOTELS IN CZECH REPUBLIC

Szilvásgombóc – this dessert is made of boiled potato dough balls with plum, apricot, peach or sometimes other fruit inside as a filling. It is served with sour cream, custard or jam, and is so good that you won’t notice how you’ll crave some more.

Kolache – the basis is a yeast dough and various types of fillings such as cream cheese, custard, fruit, and berry.

Czech like this pastry so much that they even came up with Kolache festival in Prague when vendors sell all possible and impossible variations of kolaches.

Visiting this event may add some extra inches to the waistline though. But pastries are absolutely delish!

Trdelnik – rolled yeast dough, baked on an open fire on an iron stick. It is a great example of Prague street food which can be found almost around each corner.

Comes with chocolate, condensed milk, fruit, caramel, custard filling, or plain. This treat is very popular and you can find it in all corners of Prague Old Town. It always smells so good that it’s impossible to pass by.

Strudel – I bet you’ve heard about this treat. It is a layered dough pastry with a sweet filling (apple, cherry, plum is the most popular one.)

Palacinky – crepes with various fillings. They are very popular not only in Prague but in other cities around the Czech Republic as well as countries of Eastern Europe and the Balkans.

Zmrzlina – in Czech it means ice-cream.

That’s pretty much it for now. Have you tried any Prague food? Is there anything else you can add to this list? We would love to hear from you!

Save this list for your travels. Once you are in Prague, you’ll know exactly what food to eat.

If you find this post helpful, don’t forget to save it to Pinterest to refer to it later. And enjoy your meal, guys! 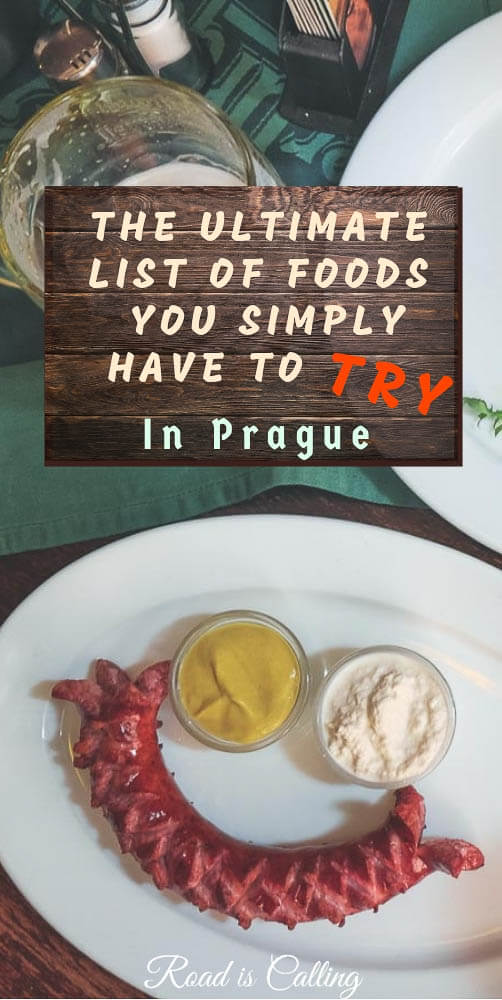 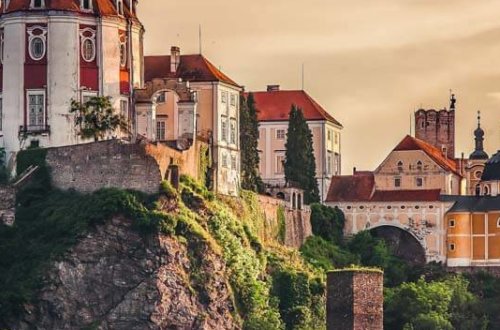 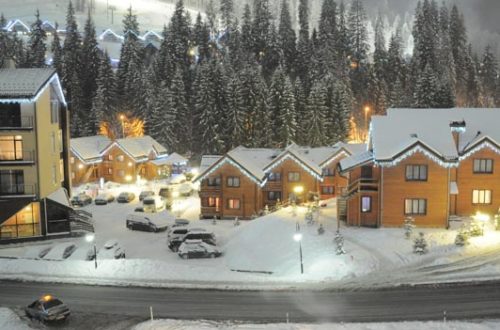 Skiing in Europe: 17 Best Ski Resorts From Budget to Luxury 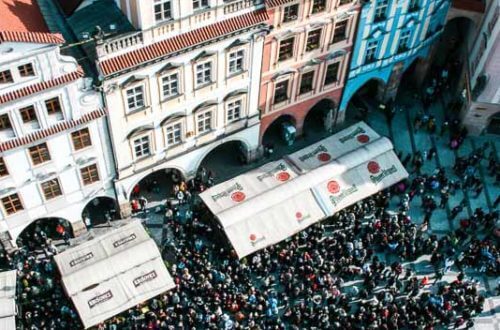 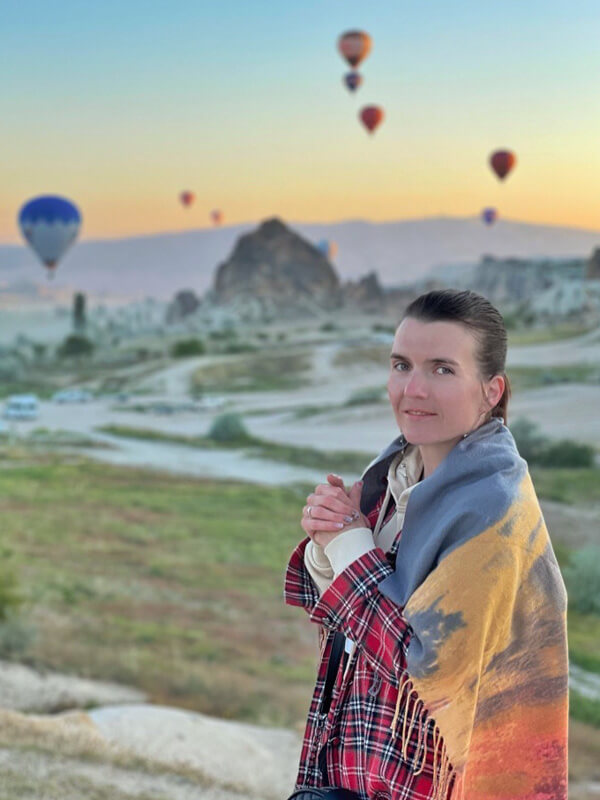 I am Anya, originally from Ukraine but in heart, I am a citizen of the world.

So, in 2017 I left America and went remote to be able to spend more time in Europe, travel to exotic places, and experience life in other destinations.

Since then I have visited over 50 countries on 3 continents and lived in 7 countries.

My mission with this blog is to show you life in foreign lands & help you plan a perfect holiday.