I have a little suggestion for anyone who is looking to travel along the Aegean coast and wants to experience a bit of village life in Turkey. On the way from Edremit to Dikili, near the famous seaside town Ayvalik and Cunda Island, there is a small medieval village Küçükköy which undeniably deserves more attention than it gets. This village is really small and not very famous but it overflows with history and makes an ideal place to pause for a few days.

As with Bergama and Sirince, Küçükköy happened in our life purely by chance too. After many weeks in Bodrum, we were on the way to Istanbul and instead of driving the entire distance in one day, we just decided to take a coastal road and see more places that we haven’t seen yet. Plus, we’ve heard many times how many cute villages and towns are situated along the Aegean coast of Turkey, so we wanted to slow down in one of them.

Two of those places we wanted to see this time were Ayvalik and Cunda Island. But we had no intention of staying in any of them. Due to their busyness and popularity, these two destinations get too crowded and touristy in the summer. And our desire was to stay in a quiet authentic place, not overtaken by tourists. 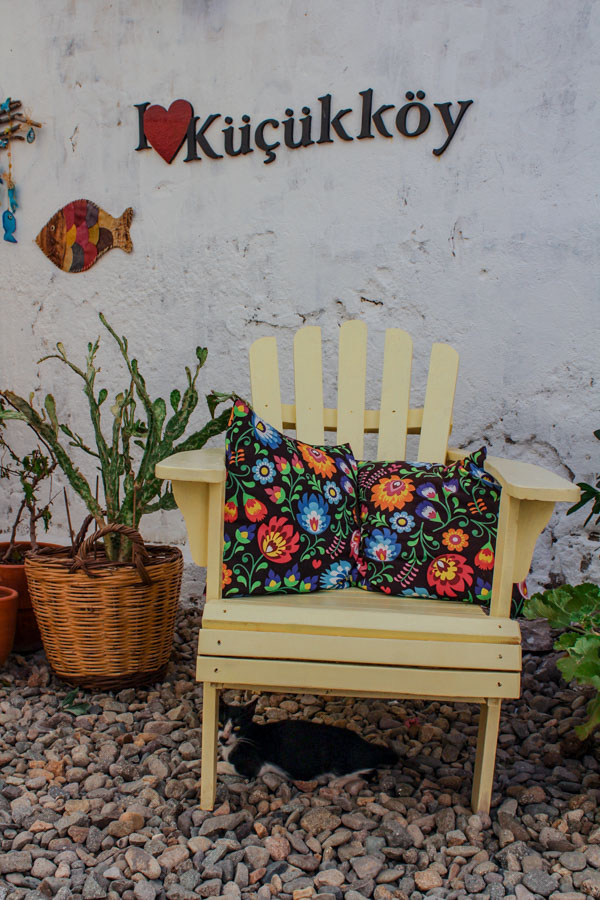 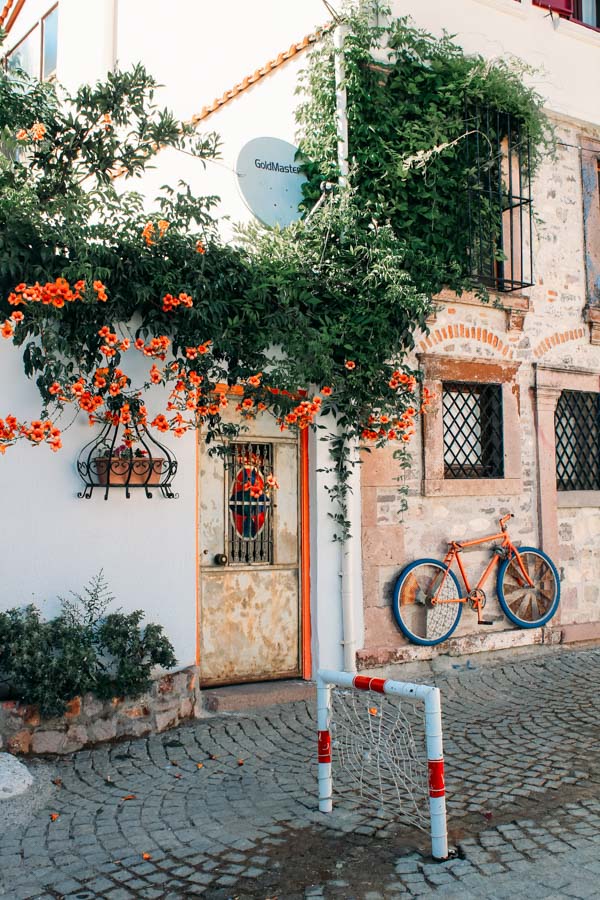 Küçükköy was just that place. Being only 15 km from Cunda and 7 km from Ayvalık, it offers a wonderful base for anyone who wants to enjoy the village life and have a quiet time away from the crowds. At the same time, due to its fantastic location, it is very easy to explore the surrounding area while staying there.

I don’t remember how I learned about Küçükköy, most likely from one Turkish publication mentioning it as an old Greek-Bosnian village that today is developing fast as an artsy eco-village.

We came for a night but extended for two more. With many activities, a peaceful village atmosphere and a beach nearby, we could easily spend a week and not notice how quickly time passed.

Küçükköy Village in Turkey – A Bit of History

Küçükköy village got its name relatively in the recent past. Before it was Küçükköy, the name was Yeniçarohori which in Turkish meant ‘a place of the janissaries’. It was built in 1462 as a small settlement when Sultan Mehmet the Conqueror had the janissaries set up a camp and suppress the riots that broke out in the 1400s after the conquest of the island of Lesvos (nowadays Greek island). Janissaries were staying in the area for years, slowly mixing with Greeks who were moving from Ayvalik and nearby islands and bringing their own way of living.

In 1800, the settlement completely became Greek after Ayvalık’s independence from the Ottomans and Greek immigration from Greece. Greeks started to develop the village, building typical Greek homes and named the settlement Yeniçarohori.

However, in 1924, during the population exchange when all Greeks had to leave, Bosnians from Montenegro and Macedonia settled in the village. They lived there until the early 1980s  but also left due to financial hardships and settled in the summer town of Sarımsaklı, which is 1 kilometer away.

Küçükköy became abandoned and almost a ghost place with only a few Bosnian families living in scrutiny. But then in recent past, artists from different parts of the country started to settle in Küçükköy, bringing it back to life. Bosnian families who left in the last century started to return with the goal to make it an eco-village and transform it into a village of the future. They started to open art galleries and shops, arrange events combining art and technology, and use traditional agricultural methods with technology and innovative solutions. 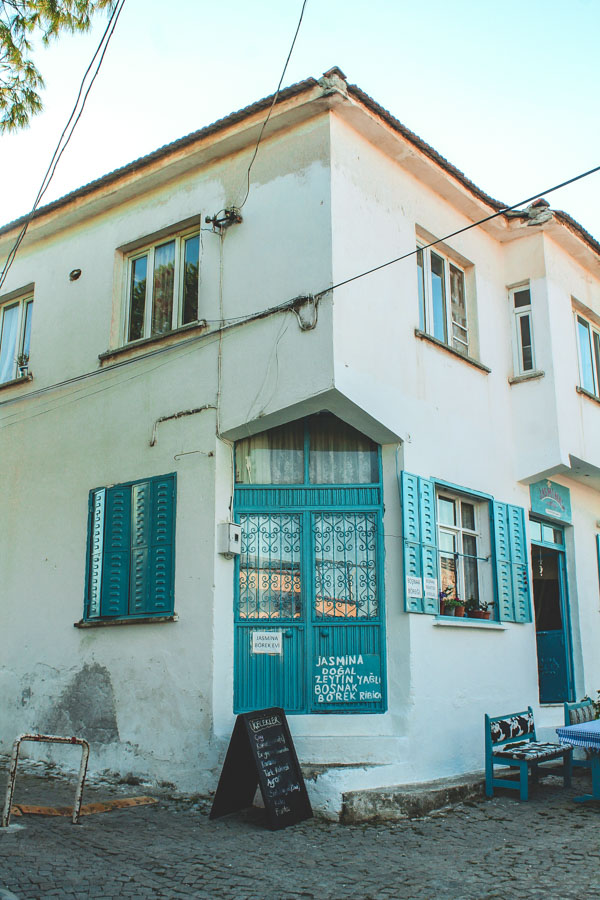 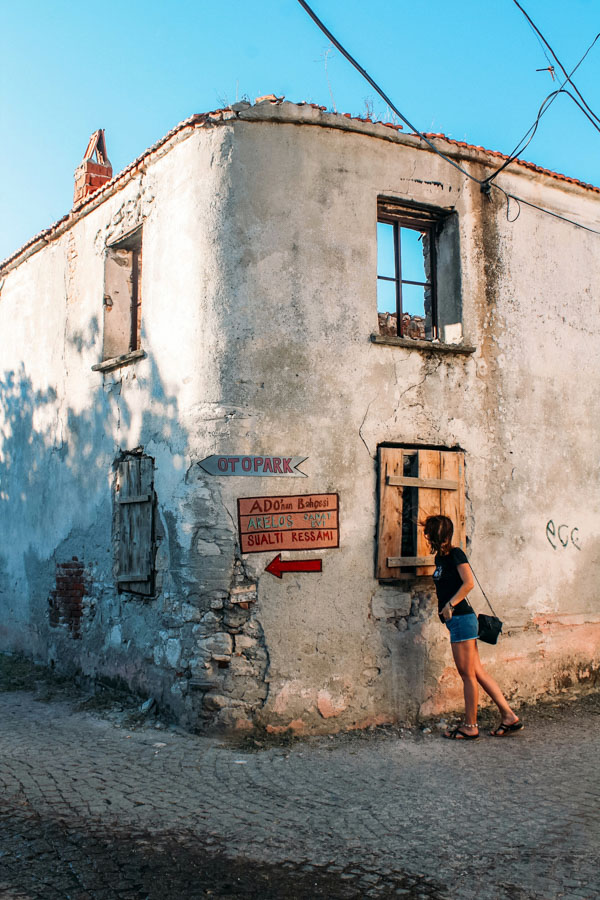 Küçükköy is still developing, yet it offers authentic Turkish village life with all the comforts to a traveler.

Thanks to only a few people who devoted themselves to rebuilding this village, Küçükköy became one of the most beautiful examples of change in Turkey. With investments in technology and real estate, it became a meeting point for entrepreneurs. With many artsy souls in the area, it is a center of art, exhibitions, and handmade crafts. And with many Bosnian families who opened their restaurants, this small pretty village is also a destination for Bosnian food.

And with all of that, it is undeniably becoming more and more popular among tourists. For now, tourists from all around Turkey but not so much from other countries. Yet.

As a result of investments and reconstruction that took place over a short period of time, the village was reborn into tourism and transformed completely. It got fancy properties, quirky hotels, and boutique guesthouses. Today it has one of the most valuable real estate in all of the Ayvalık area. 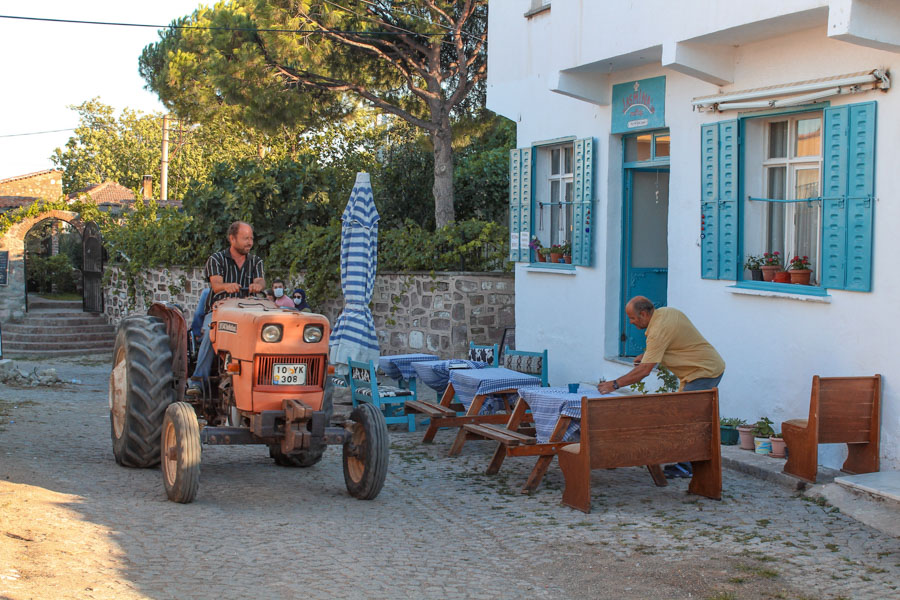 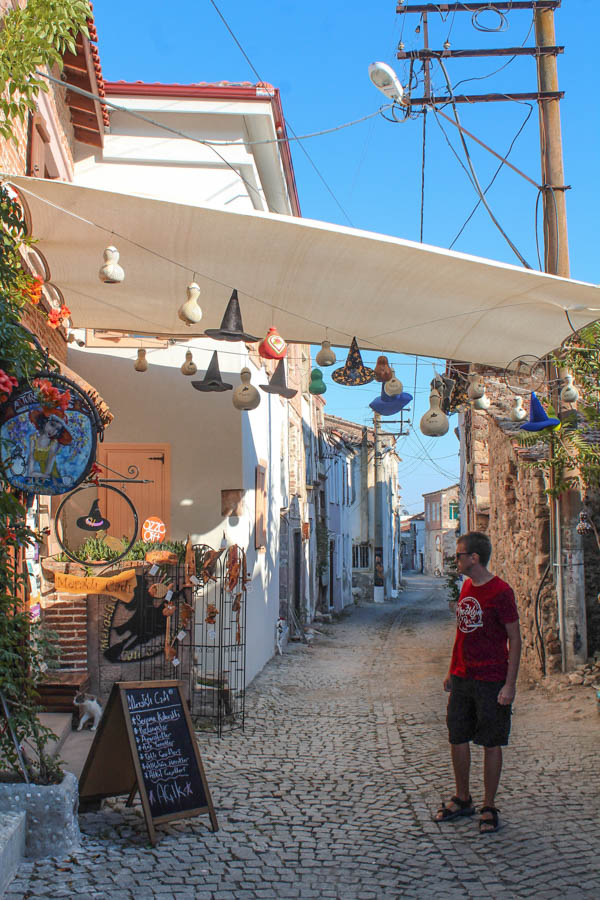 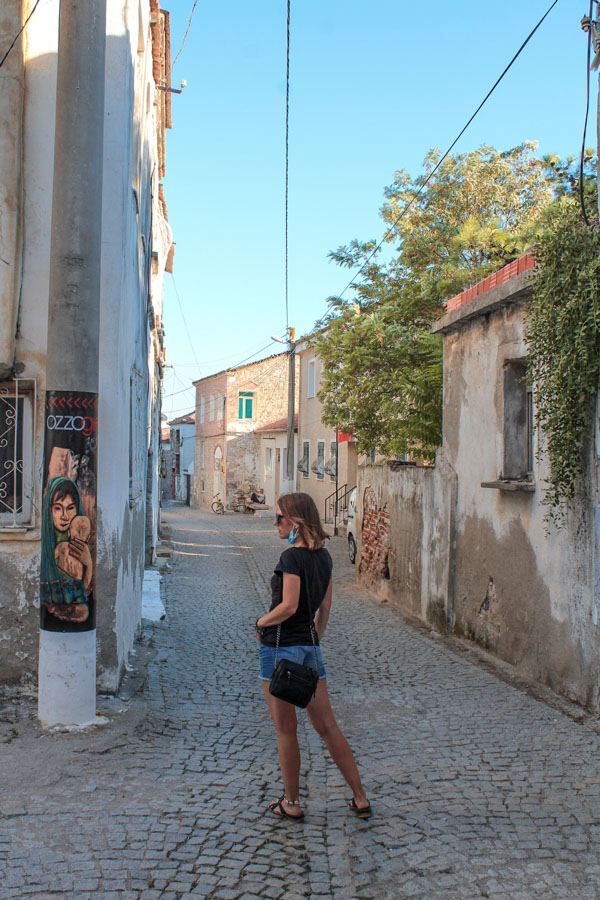 What to Do in Küçükköy

If you are looking for a bit of slow village life in Turkey, most likely you won’t want to do a lot. But if you do, you should tour the village, attend local workshops and galleries, museums and a cultural center.

Other than that, Küçükköy has quite a few boutique hotels where to stay and unplug from the world. If you decide to stay here (as we did), you can explore the nearby small town Sarımsaklı, the capital of olive oil Ayvalik and one of the most beautiful islands in Turkey Cunda Island. Sarımsaklı with its beautiful beaches is only a short drive away. So if you feel like hitting the beach, there is a chance to do it too.

We came to Küçükköy just to relax. The guesthouse where we stayed, Narli Kiz Konagi, was very cozy and had good wifi. We worked, went for a walk popping in every gallery, chatted with locals (even though their English was poor, we still had a lovely talk), photographed all local cats, purchased olive oil soap, and learned the history of the village and Balkan migration in Kent Museum. The museum didn’t have any language other than Turkish, so it was a bit challenging to understand the message. But it wasn’t a problem for us.

However to be honest, the main reason we came to Küçükköy was not even the number of things to do. We came for the atmosphere and antique art. We drove around the entire coast between Sarimsakli and Alibey Island but in the end of the day were returning to our quiet guest house and village life. 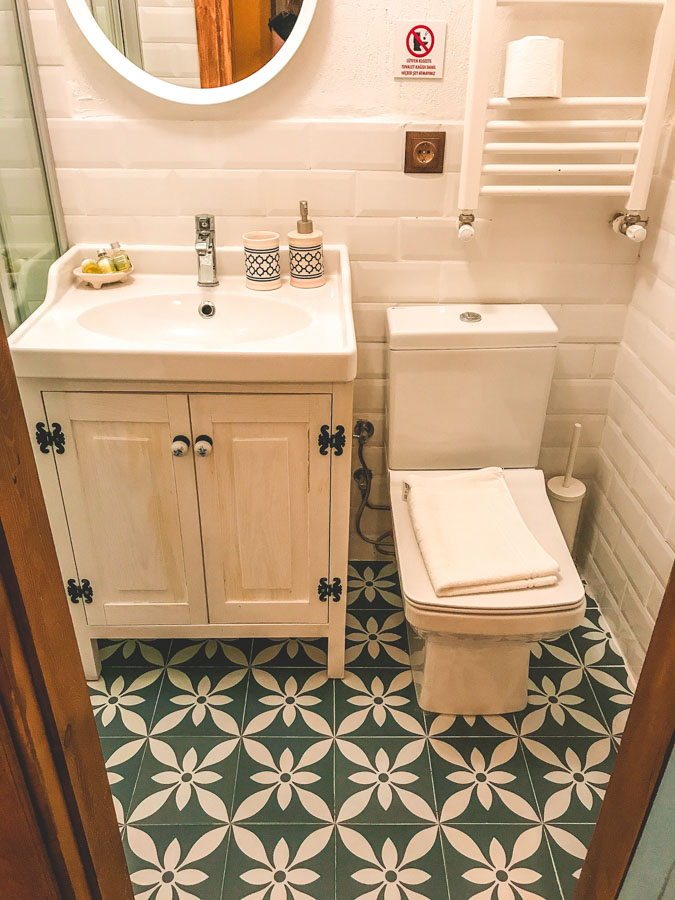 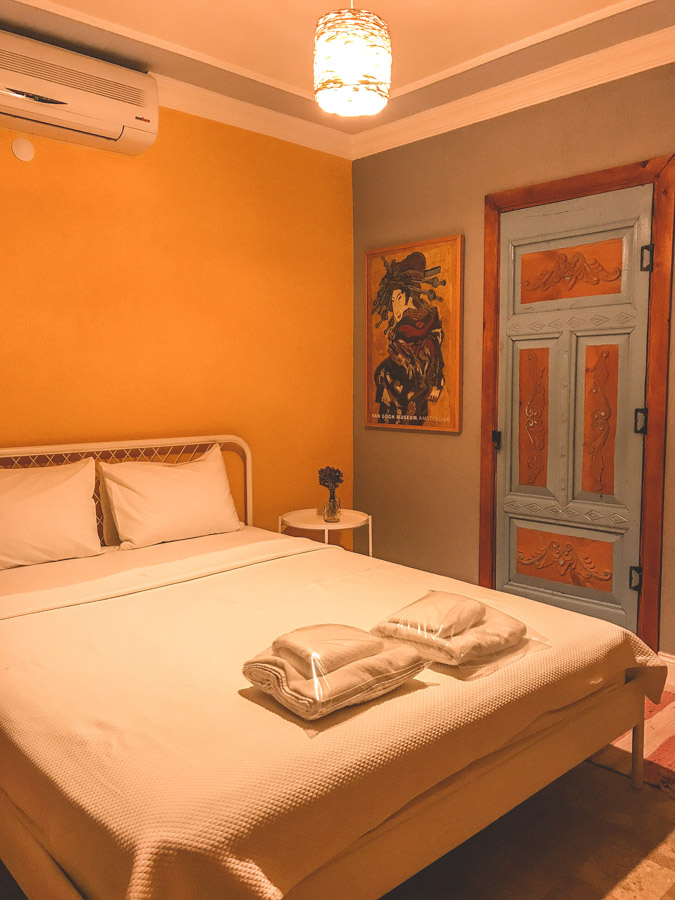 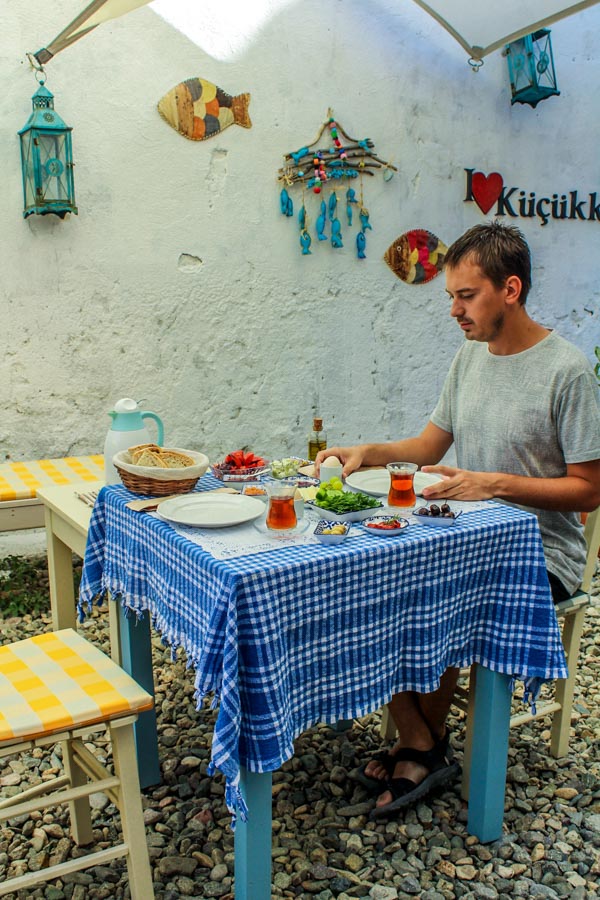 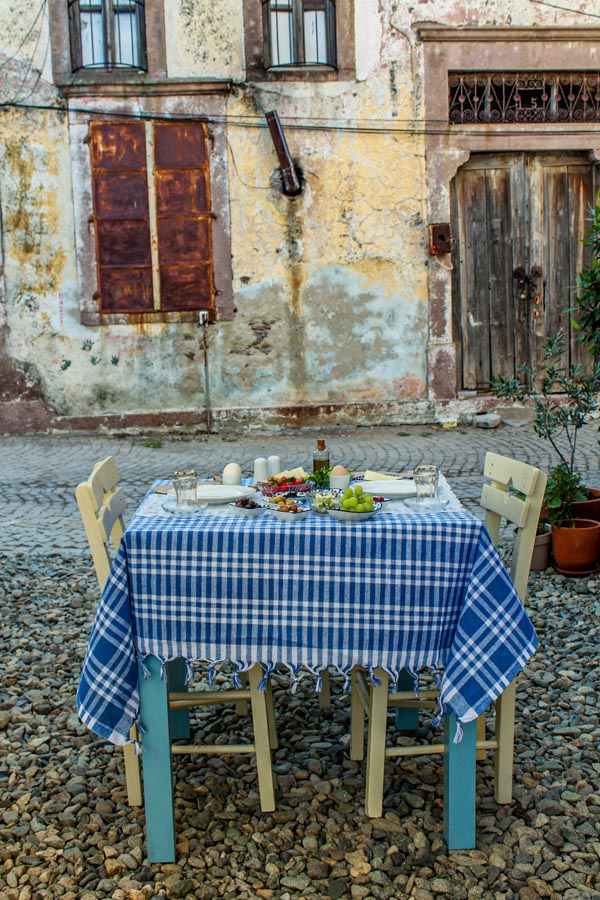 Among all the places we visited, some of those you’ll love are:

– Artura Gallery – both an exhibition area and a bistro that hosts works of important Turkish artists. They have a beautiful atmosphere in the gallery’s courtyard under the trees, so be sure to stop by to get a cold coffee drink. Click here for the location.

– Artura Art Craft. Another art gallery where the owner sells hand-made jewelry inspired by the Janissaries and the sailors of the Ottoman period. Here you’ll also find sandals by the Hellenistic period and accessories such as belts, wallets, and more. The location is here.

– Atelier Art Center. If you love art, this center is the right place to go to in Küçükköy. This is not just a center. It is actually a house, workshop, and exhibition area of one artist who fled Istanbul to settle in this village. He lives here year-round, creates his work, and shares it with the public. Check where it is on a map.

– Kabbak House. A gallery-shop where husband and wife sell hand-made gourd lamps. Very beautiful and piece of art for sure! I wanted to buy one for our home.

– Majka restaurant. A cafe in Küçükköy where you can find amazing Aegean breakfast and Bosnian pastry with olive oil. 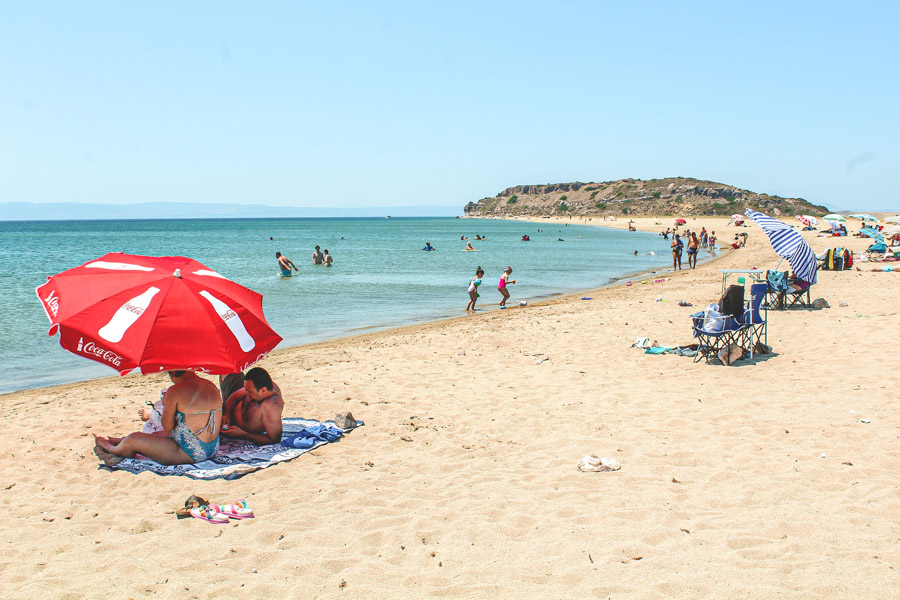 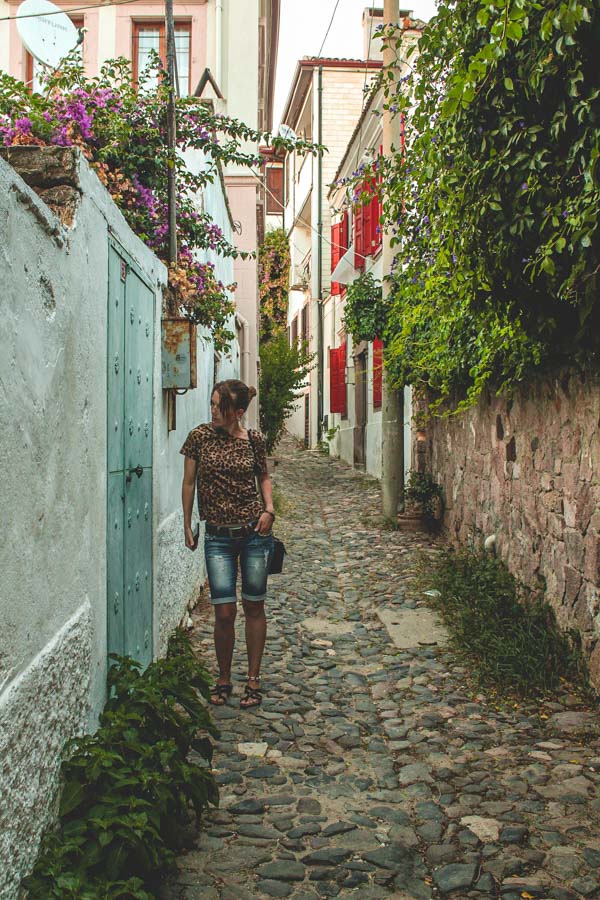 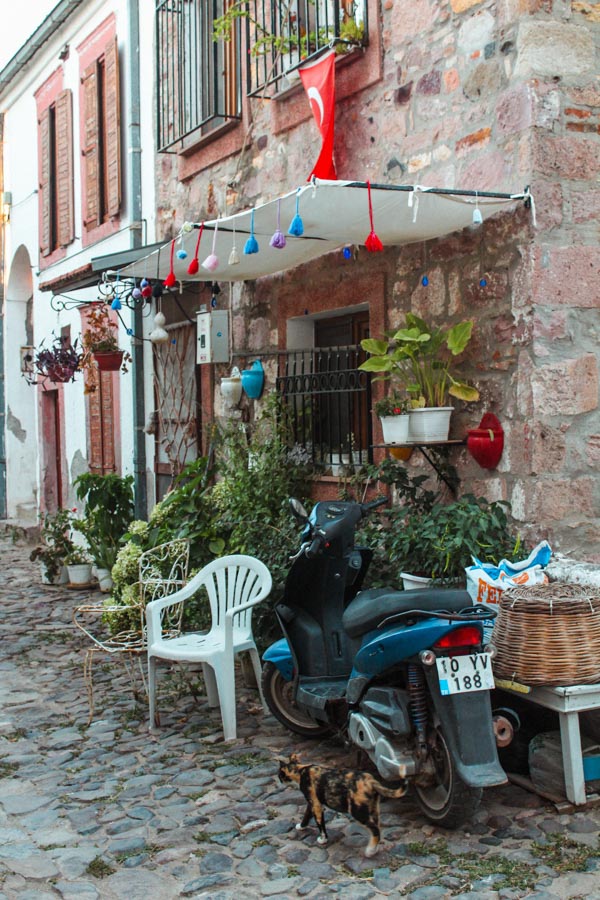 Where to Stay in Küçükköy Village

We stayed in Narli Kiz Konagi guesthouse, mentioned above. After seeing the photos of this property in one Turkish magazine, I got inspired. This guesthouse regularly gets awards as one of the best small boutique hotels on the Aegean coast, so I really wanted us to stay there. And we didn’t regret. However, it is not the only property where to stay.

Among other guesthouses, Hayat Alti Otel and Ladiva boutique hotel & coffee have excellent reviews too.

How to Get to Küçükköy Village

The fast way to visit Küçükköy village is by car on a trip to Ayvalık or/and Cunda. If you plan to visit Dikili, detouring to Küçükköy will not take a lot of time. If you want to go from Istanbul with your own vehicle, it will take approximately 5.5 hours. From Izmir, it is only 2 hours drive away.

Another alternative is to fly to Edremit Airport and rent a car from there or to reach Ayvalık with the shuttle bus from the airport and then go to Küçükköy by the public bus.

If you are coming by car from the south or north, there will be signs to Ayvalik on both sides. Closer to Ayvalik, there are signs to Küçükköy, so missing it is really difficult.

More Turkey Posts That Will Come in Handy

– Is Turkey a good country? 6 Main Reasons Why You May Want to Move Here

– 15 Interesting Facts About Turkish Culture to Know Before Visiting

– Guide to Car Hire in Turkey – All Important Questions & Answers

– 25 Photos to Inspire You to Visit Ancient Bergama & Pergamon 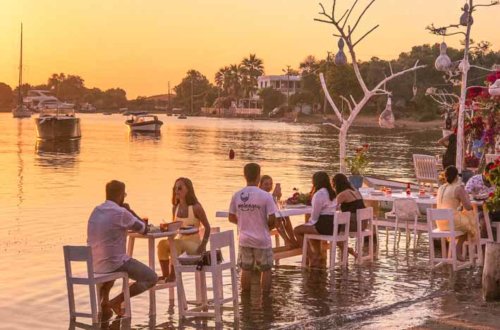 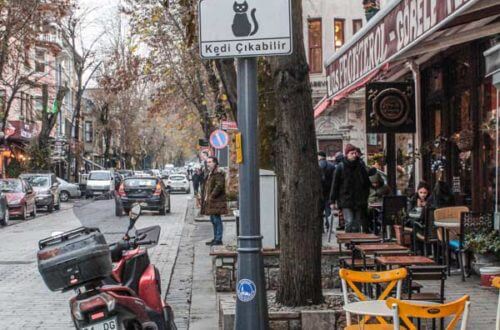 Best Areas in Istanbul: What to Expect From Istanbul Neighborhoods & Districts 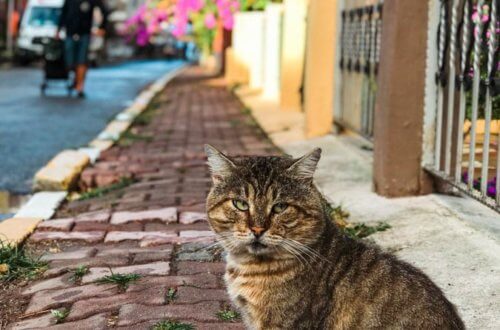 Burgaz Island Near Istanbul: The Most Romantic Princes’ Island Among All 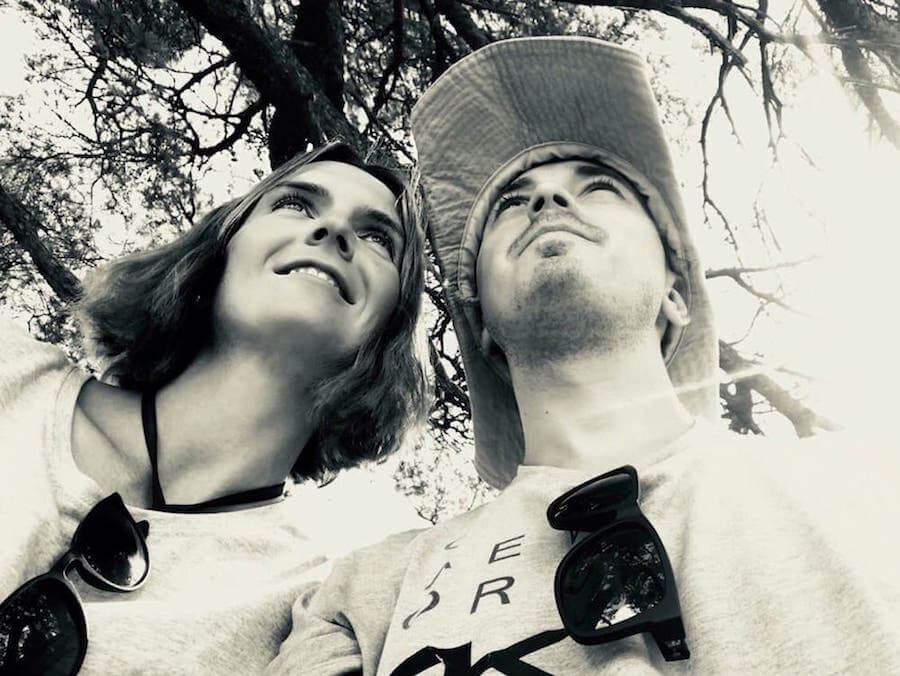 During the last 10 years, we’ve had careers that enabled us to live and travel abroad. Since 2017 we went remote with a goal to live in more countries around the world and find a place we can eventually call home. Interested to learn more? Read Our Story page